Christmas charades is an easy, classic non-verbal guessing game that requires little set up but brings on lots of laughter and fun. Grab your free Christmas charades word list printable cards that are color-coded by themed category!

If you’re searching for more holiday fun, we’ve got way more Christmas Charades and other entertaining Christmas games in our huge Christmas printable games bundle at a whopping 40% discount for a limited time! 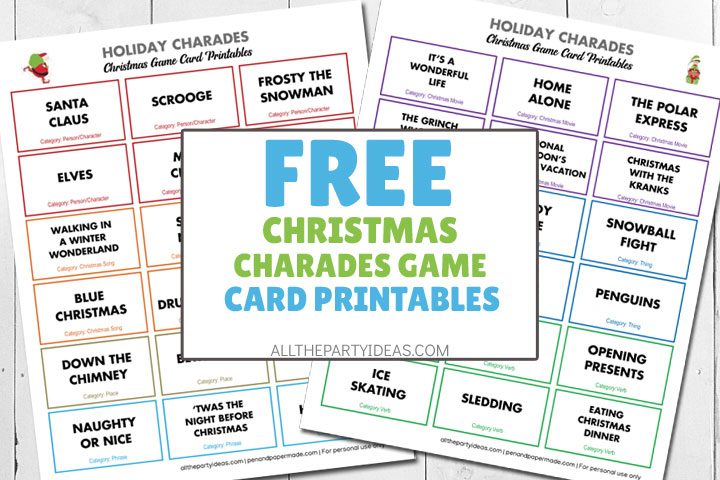 Our Christmas charades game card printables come in pdf files that are easy to download and print. Use as a fun holiday party game at a family gathering, office party game, or classroom activity that’s perfect for all ages!

How to Play Christmas Charades

Print out the holiday charades game cards at home or at your local print store. If you plan to use the printables over and over, consider using stronger cardstock or possibly laminating the cards.

There are different variations you can play of the game, but the basic idea is that someone will be selected to pick out a holiday-related term from the bowl and pantomime it for others to guess. The person can only use gestures. No speaking is allowed.

Single Actor
A non-competitive version is to have one person go up at time to select a card from the bowl and act out for the entire group until someone guesses correctly. The first person to do so then becomes the next person to goes up to have a turn acting out the next card.

While this is great to keep the game non-competitive, you may have some folks who don’t have a chance to go up to act.

Or if the person who gets the correct answer first has already had a turn acting, they can select the next person to go up to perform for the rest of the group.

In this version, one team will play at a time each round. One person will act out for their group to guess within a time limit (usually 1 minute). If the team gets the correct answer within that designated time frame, they get the point. If not, then the next team has one chance to guess what the holiday term is and steal the point.

Simultaneous Team Turns
Another competitive way to play this game is to have a member from each team go up to act at the same time for their respective teammates to guess. Whichever team is first to guess correctly gets the point.
Reverse Charades or Group Charades
Another fun, more rambunctious way to play holiday charades is to have one person be the guesser and the rest of the group perform gestures to get that one person to guess correctly.

Or, you can have one team go up to act out for the other team(s) to guess the word or phrase for a less competitive, more friendly game.

Whichever version you choose to play, be ready to have lots of fun playing Christmas charades!

For personal use only. Watermark will not appear on the downloadable version. Do not share or link to direct file; please spread the word by sharing this blog post. Thank you!

If you’re looking for a mega list of words for Christmas charades, then we’ve got you covered. Or, enjoy a sample with our free Christmas charades game card printables to download for your next holiday gathering. 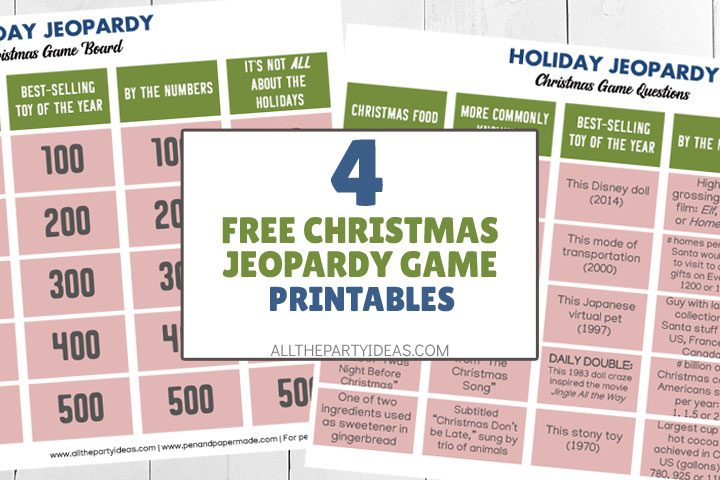 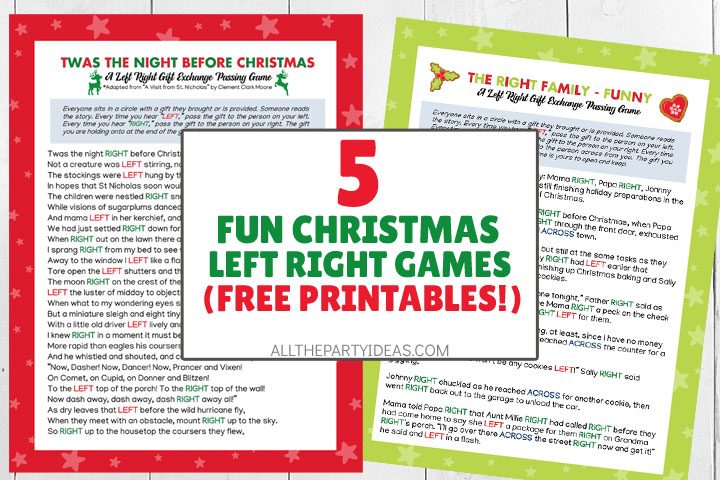 WELCOME TO ALL THE PARTY IDEAS! 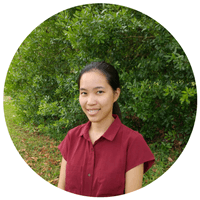 Hi, I'm Sylvia, an event organizer by day and All the Party Ideas creator by night offering practical party planning tips for birthdays and other celebrations.

All the Party Ideas